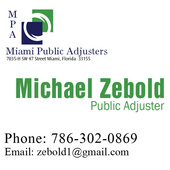 Working with a Public Adjuster

By Michael Zebold
(Miami Public Adjusters)
Professional Real Estate Sales Associate As a professional real estate sales associate you are fully aware of the inspection process required in most sales and purchase contracts prior to closing. The inspection results can sometimes create undue stress and tension for the seller, buyer and real estate professional. What you and the Homeowner (Seller) might not be aware of is, that in many cases, damages such as roof leaks, mildew, mold, plumbing leaks, back ups, and other water sewage related damages may be covered by insurance. As Licensed Public Adjusters with many years of experience, our company will conduct a free preliminary inspection and evaluate and determine if those damages are covered under the Homeowner’s policy. We will represent the Insured (Seller) for covered damages... 01/28/2009
Comments 4 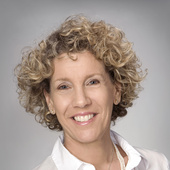 By Lynn Cromer
(ReMax Advance Realty)
Fairchild Gardens in Coral Gables, Florida Today I went to Fairchild Gardens to see the annual Chocolate Festival. Yummm! There were people all over the place eating all kinds of chocolate foods... chocolate churros (Cuban version of a donut or funnel cake), chocolate fruits, chocolate candies. You can only imagine! People were learning how to make chocolate, listening  to lectures on the history of chocolate, visiting the Chocolate Spa & exploring the rainforest to learn how chocolate grows and sample yummy chocolate delights. There were cooking demonstrations, tastings, plant sales and lectures all over the gardens. It was truly a lovely 74 degrees day in sunny Coral Gables, Florida. Doesn't it look like everyone is having a great time? For those of  you unfamiliar with Fairchild Gard... 01/25/2009
Comments 2

By Josh Wilson
(1st Continental Mortgage)
Miami FHA Home Loans 97% Financing, Miami, FL FHA Mortgage Lender, Miami FHA Mortgage programs The FHA loan program was created to help increase homeownership. The  FHA program makes buying a home easier and less expensive than other types of Seminole County loan programs. Here are just some Examples of how FHA can help you buy a Seminole County Florida home,Minimal Down Payment and Closing Costs.  ·  Down payment less than 3% of Sales Price ·  100% Financing options available ·  No reserves or required. ·  FHA regulated closing costs. ·  Seller can credit up to 6% of sales price towards buyers costs.  Easier Credit Qualifying Guidelines such as:  ·  No minimum FICO score or credit score requirements. ·  FHA will allow a home purchase 2  years after a Bankruptcy. ·  FHA will allow a hom... 01/14/2009
Comments 3

By Allan Kleer
(The Kleer Team)
The Old Spanish Village - A Luxury development of Condos, Townhomes, and office in Coral GablesAs a member of Miami's elite Real Estate Professional's Association- The Master Broker's Forum, I had the privilege of attending a dinner on the future site of Old Spanish Village in Coral Gables.After assembling approximately 20 parcels of residential and commercial office buildings, visionary builder Ralph Sanchez is rolling out this mixed use project in the heart of Coral Gables. Featuring new 400 upscale condos and townhouse, which will be completed in the second half of 2009.  Old Spanish Village will comprise a seven acre complex of homes, offices and shops in the Ponce Circle area. The 42 three story townhomes will come with elevators, roof top terraces and two car garages. All resident... 01/07/2009
Comments 0

By Audrey Ross
(Audrey Ross)
You're invited to our open houses! 100 Casuarina Concourse - a luxurious waterfront estate in Gables Estates is open this Sunday November 9th from 3:00 - 5:00 PM. This stunning estate on the wide water features 5 bedrooms, 6 full baths and 2 half baths, great room with wood-bunring fireplace and sweeping views of the wide water, a sparkling swimming pool. 431 Arvida Parkway - Bermuda style estate in Gables Estates with 180 feet on the water. Beautifully updated 5 bedroom, 5.5 bath with all the upgrades including refreshing swimming pool and spa, guest house, wonderful terrace with built in bbq and much more! Come see for yourself Sunday November 9 from 3:00 - 5:00 PM 4915 San Amaro Court -Great location near the University of Miami 5 bedrooms, 4 bathrooms, gourmet kitchen and lushly lan... 11/06/2008
Comments 3

The right price for luxury

By Audrey Ross
(Audrey Ross)
Establishing the correct price for your home when you first put it on the market has even greater importance if you are selling a million-dollar-plus property. Buyers who are shopping in a high-end market are likely to be well educated in real estate protocol, and well aware of how other properties are priced. If a luxury home is overpriced by a quarter of a million dollars, a qualified buyer will probably look elsewhere, or wait for you to drop the price. What features can legitimately push the listing price to the top of its range? Generous square footage in the house and on the lot, a glorious view, lakefront or oceanfront access or a glamorous history all add up to a winning listing.      The amenities must be equal to or better than those of neighboring homes in the same cate... 11/05/2008
Comments 9

By Philippe Diener
(Brown Harris Stevens)
GABLES PARK TOWER was built in 2003. Coral Gables real estate is among some of the most desirable real estate in Florida and offers spacious residences, direct ocean views, 5 star amenities and 24 hours security and much more. Many investors buy GABLES PARK TOWER Coral Gables condos both for investment and as a vacation residence. 08/29/2008
Comments 0 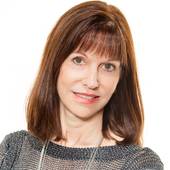 By Monica Rich, Coral Gables Real Estate
(Berkshire Hathaway Florida Realty)
JUST SOLD  - 1425 Sorolla Avenue, Coral Gables, Florida $900,000 Totally remodelled with all the charm and character of a 1925 Italian Villa!   This 3 bedroom 3.5 bath classic features a large lush master suite with jacuzzi tub and french doors leading out to a serene pool patio area that is private and tropically landscaped.  The first floor has a media room with surround sound, den with built in cabinetry and a murphy bed, a grand formal living and dining room!  The second floor is a perfect one bedroom one bath guest suite with a private entrance.  No details in this remodel were overlooked! For information concerning this sale contact selling agent at lomonaco.m@ewm.com 08/21/2008
Comments 0

By Philippe Diener
(Brown Harris Stevens)
Gables Park Tower - Merrick designed the downtown commercial district to be only four blocks wide and more than two miles (3 km) long. The main artery bisected the business district. Merrick could boast that every business in Coral Gables was less than a two-block walk. The old electric trolley system was replaced by the popularity of modern automobiles; today a new free circulator trolley system, initiated in November, 2003, that runs down Ponce de León Boulevard is in operation. Coral Gables is known as a pedestrian-friendly destination. Located only four miles from Miami International Airport, the 'City Beautiful' boasts more than 140 dining establishments and gourmet shops, plus many notable international retailers. Among the beautiful and distinctive landmarks in Coral Gables are t... 08/21/2008
Comments 0

By Philippe Diener
(Brown Harris Stevens)
Coral Gables condos: Coral Gables - Florida's Global City - Is the crown jewel of the world renowned community of Miami-Dade.The city of Coral gables known for its preservation of history and lifestyles of old Florida and is often referred to as the Beverly Hills of Miami-Dade, but with cutting edge innovation in the latest technological advances...such as a wireless downtown and being the first municipality to connect to the NAP of The Americas.Coral Gables equally enjoys the reputation as a globally recognized 'Center of Commerce' as Latin America and regional headquarters to US, European, Latin American and Far East based corporations, such as ABC News, AT&T Americas, Adobe, Alcoa, American Airlines, Apple Computers, Bank Boston International, BBC, Club Med, Del Monte, Dow Jones, Exx... 08/06/2008
Comments 0 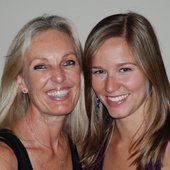 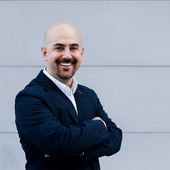 The Implosion at Old Spanish Village in Coral Gables

By Adrian Salgado
(DASH - A Real Estate Company)
After a 3-month delay due to something called asbestos, the implosion of the almost entirely-gutted 12-story office tower located at 2801 Ponce de Leon Blvd finally “took place” on Saturday morning: | View | Upload your own The smoke: | View | Upload your own The smoke clears: | View | Upload your own Raul, the lone representative from the Gables Condo Blog to attend the event (the other failed to hear the Urban Theme ring tone of his Motorola Razr at 6:02 am while counting sheep - the Cabernet Sauvignon from the night before may have had something to do with it), described it as: “Anticlimactic. The first implosion in the history of the City of Coral Gables was a dud. Tripods, 35 mm cameras, digital sophistication, screaming children, frightened adults, champagne sippers, political big... 06/30/2008
Comments 1

By Adrian Salgado
(DASH - A Real Estate Company)
Sunday, February 17, 2008 11:30 am (ish) Chili’s Outlines Plans for New Venue in Gables Remove restless torso from Stearns & Foster. Wash face. Wipe cold out of eyes. Back to Stearns & Foster. Chili’s Outlines Plans for New Venue in Gables Miami Herald headline remains unchanged. The development of the U.S. Interstate Highway System (Dwight D. Eisenhower’s baby) in the 1950’s facilitated many things. It allowed businesses to ship goods and services across the country, families to utilize the vehicle to vacation in far-away destinations, and facilitated the birth of the franchise chain. Motels, diners, gas stations, and fast food chain restaurants soon sprouted next to every highway, in every town, every city, and (later) every suburb throughout America. While Coral Gables has never bee... 06/26/2008
Comments 0
<< Previous 1 2 … 9 10 11 12 13 14 15 16 17 Next >>
Explore Coral Gables, FL
Coral Gables, FL Real Estate Professionals