Just curious.....if you don't know the facts, should you voice an opinion? Seems like there is a whole lot of speculation going on around here.

What annoys me the most is when people have such a strong opinion on a subject and they don't know their ass from their elbow about it.

They comment with such authority and righteousness.....I see it all the time.

Facts please nothing but the facts and btw I did not start the rumor!

Hi Roger... you mean we shouldn't believe anyone's lying eyes? Seriously, I'm all about not opining unless I know facts and if I feel moved to opine I need to disclose upfront that I don't necessarily have command of all the facts.

Speculation can be a wild guess or someone just trying to figure something out. I respect the opinions of others, even when it appears to be based on their own experience and not on all the facts.

Facts!!!  How can I argue with someone when they have all the facts.

In courts of law, they will get out of you what factually took place ignoring your opinion using questions and answers. Called testimony, deposition or an affidavit, it is still subject to reasonable doubt or preponderance of evidence unless the famous end all appears; the smoking gun! Fact of all facts

Active Rain is where I come to avoid the rumor mill and deal with the experience and facts of others' years in the business, to see what's going on around the country through good agents and learn. If we're not posting facts, I'll cancel my subscription to AR and buy the Enquirer instead.

Are facts now required in this section?

Curiosity killed the cat, but for a while I was a suspect - Steven Wright

Yeah, yeah I know it doesn't answer your question but it seems an appropriate response in my mind.

Only if they can cleverly answer them like you do Roger!

Well, there are so many who don't what they are talking about, and never look at the facts and get upset when you show them the facts.  What is sad is when I hear the facts repeated as a mantra just because someone said it. A

It is always fun to start a rumor? Is that what you are saying here?

IF you choose to voice an opinion without knowing the facts (as with a rumor circulating), preface your opinion with "It sounds like" or "Based on the information provided" or some other type of disclaimer. Of course, the best response would be no response.

I had a similar situation recently where two people told me different things about an agent which sounded completely out of character for that agent. What those people did not know is that the agent is a good friend of mine so I called and asked the agent point blank if the rumors were true.

That's just how I roll, though.

We are naturally inclined to speculate without the facts.  Perception becomes reality unless the facts are made available.

Where there is a mind, there is an opinion, and often several.  And the opinions may oppose!  (That's called hypocrisy or talking out of both sides of the mouth.) Voicing an opinion and whether we should do so is a matter of how well we discipline the mind.  Mine could use a little work, lol!   :  )

I am speculating that it will come out in the wash soon!

As long as we realize that we are not entitled to our own facts, I think we can proceed. For me I think certainty can be be arrogance misunderstood.

Where is your hard data substantiate your claim?  I always ask.

It's hard not to voice an opinion when you know the "who" that is being discussed. Both observers and those who have been in the crossfire will likely have an opinion, and do so from personal experience or interaction. Speculation is more dangerous if there are no facts to support what is said. This can create a reality that is anything but.

Off to read the speculation if I can find it!!

That is what this blank square is for, for me to express myself and sometimes align that expression with the question.

Many posts leave out some information that would be helpful in accurately assessing the situation; so the answers may run the spectrum.  However, people all mean well in their replies and do their best to give a different perspective.  Or, someone may read a question differently and go off on a tangent that is non-related.  Can be entertaining...

Roger D. Mucci - happens all the time - though I can't say much about it, I know nothing....lol!

Yes, it is annoying.

facts, no opinion I say.

Some folks like to open their mouth and show their ignorance.

There's always two side to a story.  I don't jump the gun or give my opinion until I know all the facts.

Rarely do we ever really have all the facts. Even in court rooms rarely are all the facts revealed.  Just like A holes ... we have an opinion.

This happens a lot when there is a new agent.  If you don't know, you have to say --- I will check into this and get back to you.

If I only expressed opinion on fact it wouldn't be opinion, it'd be fact.

"Beyond my area of expertise" or "above my pay grade"!

"My mind is made up, don't confuse me with the facts" is what I immediately thought of after reading your question.  Ideally we are all open to considering opinions other than our own, but at some point you have to have some basis to work from.

Susan Emo's comic says it all!  I try to keep my mouth shut (or is that fingers off the keyboard?) unless I can speak with knowledge/authority about something (or at least think I have that knowledge/authority).  I've been proven wrong before on here (bitcoins come to mind), but I'm man enough to admit it.

I know nothing, so I will have to sit back and wait for more details here Roger. 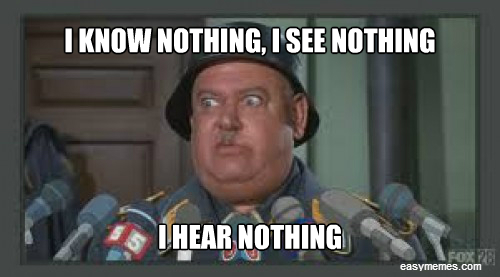 opinions and a$$holes, everyone has one and some of them stink, at least that's what my grandmother told me once.

You probably shouldn't voice an opinion if you do not know or have the facts, though we often do Roger D. Mucci!

I don't think so.