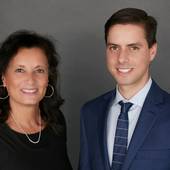 Our Team’s constitution, giving our clients the assurance that their interests are being honored & protected. We believe "that you should hold us accountable & we are because you matter most!"

Get to know Kyle And Norma

Sellers, NOW is the time to sell, it's a booming market! Properties are still getting mulitple offers and buyers are still buying.

Buyers, interest rates are at historic lows, you have great houses to choose from and there are more buyers sitting on the sidelines. Your opportunity is here today! Here NOW! DM us right now!

Our customers have spoken - thank you to all our fantastic and supportive clients. We would not be where we are without you. Thank you for all your trust throughout the years. Because of you, we are able to grow, expand and share our dream of what real estate should be. We love you guys and here's to you.... cheers :) Real estate is about being in the right place at the right time. It's about what's are up and coming, the little niches, nuances and distinctions that make your buying and selling in SoCal a unique and awesome experience. It's about neighborhoods, family, friends, culture. It's about entertainment, dining, shopping and nightlife. It's about your perfect place. We Are Real Estate. We bring people together with the right home, the right investment, the right choice. Our team strives to perfect the systems and strategies that get more homes sold for the most amount of money in the least amount of time. Contact our hardworking team to make your next home sale or purchase. Proudly Serving Burbank, Redlands, San Bernardino, The Greater Los Angeles Area and The SFV. Real Estate Info with the latest real estate market updates, information, knowledge and expertise. Specialties: Home Evaluations, Neighborhood Market Reports, Marketing Resale, Luxury, Condos and Town Homes in The Los Angeles Area. Assisting First Time Home Buyers and Relocation Buyers Realize The American Dream. To many more years of serving you all from Burbank to Redlands.

The Jewel of the Valley and one of the most desirable places to live in Los Angeles County. Studio City boasts some of the coolest places to hang out from trendy Tujunga Village and Ventura Blvd to next door artsy and hip NoHo Arts District. Right around the corner is Universal City, where night life and movies are the scene. Studio City has close access to The Westside via Laurel Canyon and Hollywood via Cahuenga therefore no need to commute via the freeways. Studio City neighborhoods range from the hillside multi-million dollar view homes to the tree lined streets of homes with interior character to warrant and distinguish the Studio City Class.

Downtown Burbank attracts young professionals -- hip and chic, working in the entertainment business. Of the 100,000 office workers who daily fill Burbank’s businesses and retail establishments, 29,000 of them work in entertainment. Burbank is also a established wonderful family community with many choices of outdoor fun via hiking the trails in the hills above Glenoaks to the many parks through out the city. Burbank is home to the mega AMC theaters with 30 screens total in 3 locations. Burbank has it's own school district, police and fire departments.

Toluca Lake - Sandwiched between Studio City and Burbank nestled among quaint charcter homes to the multi-million dollars homes on the lake, Toluca Lake offers a quiet almost out of the way feel but being close to all. Riverside Dr boast small cafe's and bistros and if you work your way west you're just a small step away from trendy Ventura Blvd. home to all the variations of cuisine and nightlife possible.

NoHo Arts District is home to Theaters, Eclectic Shops and International Dining.  The buzz to Hollywood, this is the place for all creative minds. Actors, writers, musicians, poets.... you name it, they're all here.  The hip, chic and bohemian flairs add to the feel and vibe of streets lined up with the best in all fields of art.

Thrive In Multiple Offer Scenarios, Expert Negotiators, Not Your Same Old Same Old Marketing, Innovative Ideas To Get You More Money - Sellers, Out Of The Box Thinking - To Get Buyer The Best Deal Possible, Persistent, Tenacious!

Testimonials for Kyle And Norma