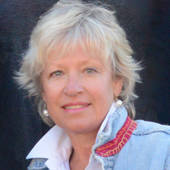 Owner/Broker working with buyers and sellers on Orcas and the go-to expert on land use and permits in the San Juan Islands. I go the extra mile to protect my client's investment. I love what I do!

Get to know Teri Williams

Teri's family has homesteaded in the San Juan Islands since the 1960's. Teri herself was born in Washington, raised in Oregon and settled in the San Juans in 1989 with her three young sons. Having left her banking job back on the mainland, Teri had no idea what the future would hold, only that she'd found the place she wanted to be and she hoped she'd "never have to put on another pair of nylons."

Virtually broke, Teri and the boys spent their first year on Orcas Island living in a camper. It was during this time she met her husband Jay, who had been on Orcas since he was 10 years old. Jay introduced Teri around, and before long she landed a job as a title examiner at a title company. After several years, she hired on with a survey company coordinating permits.

As San Juan County land-use regulations became more complex, Teri became known as the local guru of permitting. In 1998, she started her own business, Permit Resources. She never intended to get her real estate license, but a year later when someone "dared" her she couldn't resist the challenge.

While working in a local real estate office, it became apparent to Teri that her permitting expertise enhanced her ability to assist her real estate clients and her real estate knowledge was a boon to her permit clients. So in 2006, Teri began a new venture, opening T Williams Realty, a full service real estate brokerage that shares offices with Permit Resources in Eastsound on Orcas Island.

"My business is not about volume -- and I don't want it to be. I get more satisfaction out of building long-term relationships with people. If I don't feel someone is a good fit for me, I refer them to someone else. I don't sugar-coat anything; I tell it like it is. My clients appreciate this and many have ended up very dear friends of mine."

A self-described workaholic, Teri still finds time for the important things in her life - family, friends and giving back to the community. While her boys were growing up, she and Jay fed the football team every Thursday night at their house. For 13 years they operated the Back Acher Christmas Tree Farm, using the opportunity to teach the boys about business. Each summer, in one of Orcas Island's wonderful displays of true neighborliness, Teri and Jay along with many other islanders help the fourth-generation Cadden family cut and bale hay on their farm.