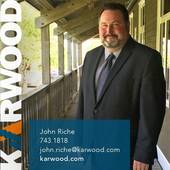 Get to know John Riche

I never left the island to seek out work when times were tough. Now that we have crossed over from a "have-not" region to a "have" region because of the growth of the petroleum industry times have never been better.... and the future looks bright.

I joined the industry in 2002 and have never looked back. I live in Mount Pearl with my wife Jody and my daughter Maddy. Mount Pearl is the province's second city to St. John's. Think San Francisco and Oakland and you get the idea... the cities are so closely linked geographically that they blend seamlessly into one another.

In addition to the purchase and sale of residential properties I am also actively involved in leasing executive properties, mostly to short term clients who are looking for high end furnished accommodations that have the luxury of a 4-5 star hotel with the size, space and convenience of a home. I also have a number of real estate investor clients and have recently began to focus on the purchase of US based properties, particularly in Florida and Nevada. I also have a site for the rental of Vacation Homes called www.vacationvillascanada.com.