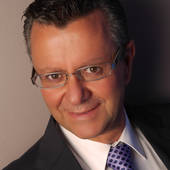 Get to know Sal Calabrese

Sal Calabrese is one of the Principals of Calabrese Real Estate.  He started the company in 1980 and has been committed to steady growth ever since.  Besides his family, Calabrese 's position as the #1 real estate company in Staten Island and Brooklyn is his proudest achievment.  Because of the revolutionary commission structure pioneered his agents have to be successful producers to thrive within the Company environment.  Calabrese invites only the best - "I believe in surrounding myself with people who are as talented and hopefully more talented than me - I think that's one of the reasons for our success."  Each agent represents Sal Calabrese  have to adhere to the highest standards of honesty, transparency and integrity.  Sal believes these attributes should be the minimum requirement for Realtors®. Delivering the highest quality service on a timely basis is equally important.

Sal Calabrese has been very involved in the Industry on many levels.  A past Chairman of the CENTURY 21 National Communication Congress and a member of the Realtors® Political Action Committe.  Calabrese was the past President of the Brooklyn Mulitiple Listing Service and the Brooklyn New York Multiple Listing Service, the Bay Ridge-Bensonhurst Beautification Corporation, HeartShare Human Services of New York and Director and Fundraising Charman of FIAO (Federation of Italian Americans). Calabrese extends himself to serve as the Past President of the prestigious Bensonhurst-Bay Ridge Kiwanis club.  It is with this 56 year old organization that he provides much of his personal time and effort in support of the club's philosphy and philanthropic orientation, "Children are #1"

The Short Sale - What You Need to Know

One Family Colonial for Sale in Staten Island - Move Right In!

Is Rehabbing a Home the Right Decision for You?

Home Staging, Curb Appeal and You!

As a First Generation American (Sal Calabrese immigrated to the United States as a small child) he and his family have worked extraordinarily hard to acheive success.  He wants his company to reflect that same determination, hard work and success through integrity that he knows is a winning formula.  As a full service Broker Calabrese represents residential and commercial markets.  Both he and his firm have thrived by providing the same quality service to a diverse client base - First Time Homebuyers, The Luxury Market and Commercial Property clients are all treated with respect; That's his credo and the company credo...as Sal Calabrese often says; "Our reputation depends on it."